When you get the value of a person via Nintex Workflows, you often get a bit of a messy string back – it starts with “i:0#.f|” and may also be “i:0#.f|membership|” . That string is the claims token. Here’s how to get rid of it using the Regular Expression action on Office 365.

END_OF_DOCUMENT_TOKEN_TO_BE_REPLACED 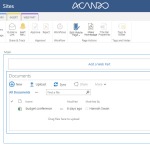 One of my favorite features in SharePoint is the sheer power available in lists and libraries. I love teaching this part of the platform because there are so many hidden gems, functionalities that people really don’t know about but can make such a difference.

END_OF_DOCUMENT_TOKEN_TO_BE_REPLACED

Microsoft has a ton of information regarding SharePoint governance. Considering that it’s such a broad subject, lots of documentation is good. The challenge is finding the most important bits.

Sometimes it is necessary to add a snippet of code to just one page. Examples could be:

There are technically a number of ways to achieve this:

Option #4 is my favorite for a number of good reasons:

For this example, I will be using a simple JavaScript which shows copyright information, in this case from 2010 to the current year. This allows the copyright to be kept up to date:

Option 1: Paste the code directly into the page content

You can paste the code directly into the page content.

However, once you save the page and view it, you will see that SharePoint does not realize that it is code it needs to render in some way.

Conclusion: do not place code directly in the page content as it does not work.

In most content editor webparts and all rich text areas, there is a button in the ribbon called “Edit source”. This is great for quick fixes when content has gotten out of hand. In older versions of SharePoint, you could also use it to embed extra code.

You can easily paste your code straight into the Edit HTML window.

However, once you save, SharePoint lets you know that the code that it does not approve of has been stripped.

In this case, some of the embedded code has been stripped out.

Sometimes SharePoint will strip out all of it and sometimes it will only strip out parts which can cause an odd result. When it doubt, check back into the HTML source to see what has happened with your code and if it is still 100% intact.

Conclusion: while this used to work under some older SharePoint versions, it is generally not a reliable solution for SharePoint 2013.

SharePoint 2013 includes an Embed command in the ribbon which can be great for adding code snippets to your page:

After clicking the command, you are prompted to insert your code and given a preview: 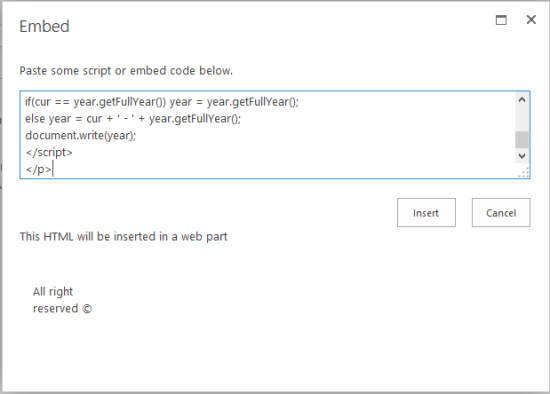 SharePoint creates a Script Editor webpart on the page for you. It even includes an “Edit Snippet” button, so you can go back and edit the code later.

The JavaScript is being displayed correctly in the webpart and also on publishing the page.

Conclusion: in my experience, this works but is dependent on the complexity of the code. Test well before using.

Option 4: save as a text file, call via CEWP

I have saved the JavaScript into a file called copyright.html. The file extension can help SharePoint determine how to parse the code when it is called, but you may need to experiment depending on your code – I have had good results from using txt, html and js extensions in the past.

Here is the file in Notepad++: 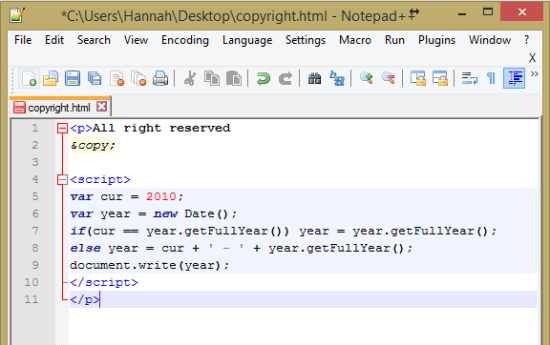 In this demo, I uploaded the HTML file to the document library on the same site as the page we are working with.

Tip: I tend to use the following rules of thumb as to where to upload these kinds of files:

Next, place a Content Editor Web Part (CEWP) on the page and edit the webpart settings. At the top, add the link to the file and click “Apply” to save the changes.

The content should immediately display in the CEWP on the page.

Tip: if  you wish to use the same webpart in many places, you could export the configured CEWP and import it as a custom webpart. You can then place it on a page and it will already be configured for you.

Conclusion: this is my favorite method due to the central storage of the files, ease of editing the files and reusability.

I’m currently working on a project where we needed to assign a priority to issues based on impact and urgency. You could always let users figure this out for themselves, but it’s much better to automate it when there are clear definitions for each value and a table which translates the impact and urgency to priority.

My first thought was: “Sure! I’ll do that! It’ll be simple.” Then I found myself looking at the calculated column formula screen and realized that it had been a long time since I had needed this knowledge.

The first limitation is that SharePoint only allows for up to 7 nested IFs. I broke the solution up into four calculated columns:

To tie it all together, the Priority – calculated column looks at the values of all three columns and displays whichever one does not have the value “N/A”. If none of them have that, then the column displays the text “error”.

To test, I showed all 6 applicable columns in a view:

I’m currently working on a project where we needed to assign a priority to issues based on impact and urgency. You could always let users figure this out for themselves, but it’s much better to automate it when there are clear definitions for each value and a table which translates the impact and urgency to priority.

END_OF_DOCUMENT_TOKEN_TO_BE_REPLACED

Phew! Barely home long enough to catch my breath and write a quick post about SharePoint Connections 2013! It was great to meet up with old colleagues and friends alike, as well as make new connections.

So much happened and I talked to so many people, I’m just going to sum up the highlights – in no particular order!

I’m really sorry I didn’t get to see my colleagues’ session on Once You App, You Don’t Go Back, which was done by Daniel Sörlöv and Alexander von Malachowski. They were kind enough to show me the speakers room (it really wasn’t as impressive as it sounds) … so I brought all the speakers some fresh stroopwafels. 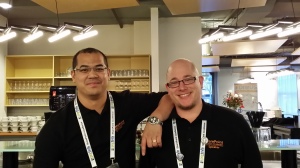 Benjamin Niaulin‘s session on the Search Content Webpart was just hands down awesome. He’s such a fun, passionate guy that you want to pay attention to him and laugh along with him. Plus, he did a little dance to illustrate how continuous crawl in SharePoint 2013 works. For this reason, I will never forget how continuous crawl actually works.

One of my notes from his session is a direct quote:

I already thought Benjamin Niaulin was pretty cool, because his blog post on Step by Step: Create a SharePoint 2013 Composed Look is my most referred-to resource for SharePoint 2013 design. Seriously, though: he’s even cooler in person.

I’d never seen or met Martin Hatch before, but his session on Dude, Where’s my Search Scopes – Walkthrough of the new Search Capabilities in SharePoint 2013 was excellent.  He did a wonderful job of showing us the different functionality and I do hope to see him again at more sessions.

I saw both of Joel Oleson’s sessions.

The part about responsive vs. adaptive design was fantastic and I’ll definitely be looking into using this more.

Upon seeing this, I promptly tried to find all of these for Android:

I loved that he showed multiple videos and pictures within his presentations.

And… lead the community with subtle movements, don’t try and control everything:

Joel also did a write-up of the event on his blog – he has more interesting pictures than I do: SharePoint Connections Amsterdam Event Recap and Slides #SPCon13

I participated in Dan Holme‘s governance workshop on the third day and I’m so glad I did.  Dan is a wonderful speaker and he did a great job of making this session work from both an IT-Pro as well as a business perspective.

I loved how he used the analogy of SharePoint as a sand castle and how he reused this analogy many times throughout the day.

I teach information architecture and occasionally information management. This diagram, which was the core of the morning section, was worth the entire price of the day for me: 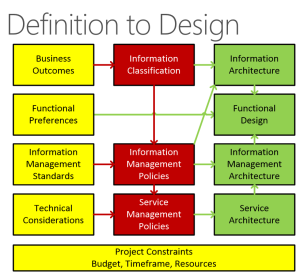 There were plenty of other useful things throughout the day, but this was definitely the highlight for me.

I spent a fair amount of the conference playing with my new phone, the Android-based Galaxy Note 3. Yes, I realize it’s more of a tablet than a phone, but that’s ok – I do most of my calling via my Bluetooth Jawbone anyway.

I don’t really use most of the Samsung apps. I find that there is too much bloatware and they just don’t do what I want. However, while playing around, I found an awesome combination: Papyrus + Evernote.

I was able to use Papyrus to write notes on the screen, even to take a picture of a slide and then draw all over it. I could then export the entire note to Evernote, which can generally interpret my handwriting and make it searchable! At least, when I wrote somewhat neatly.

The thing is, I want an even bigger screen now. Something like the Galaxy Note 10.1 would do it, I think. That 2560×1600 pixel resolution looks pretty awesome.

There you have it, my summary of SharePoint Connections. I learned a lot, but the most valuable part was the networking and getting to reconnect with old colleagues and friends.

Hopefully next year I’ll be wearing a speakers shirt!